Sell your story to a magazine – and a newspaper…


Two Featureworld interviewees, whose stories were both sold to national newspapers, this week also appeared in magazines!

Laura hopes she will never have to tell her son she is dying...

Laura Hymas’s emotional real life story about how she is living with a brain tumour was previously printed in the Daily Mirror newspaper. Until last Christmas, Laura felt she was the luckiest woman alive. With a wonderful partner, Ben and an adorable son, Jacob, she couldn’t have asked for more. But then, after suffering from strange symptoms such as being clumsy and tired, she received some devastating news – she has a brain tumour.
Doctors in the UK say they can’t do anymore for Laura so Ben launched the Hope For Laura Fund to raise enough money to have potentially life saving treatment in the US.
Laura is currently in the US receiving treatment and we are all hoping it is successful. For the latest updates follow Laura on Twitter.
Meanwhile, I have arranged for Laura’s story to appear in another bestselling women’s mag. Watch this space!

WOMAN’S OWN MAGAZINE
And yet another Featureworld interviewee stars in another magazine this week! 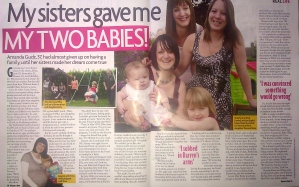 Amanda Gudz’s story about how thanks to the generosity of her two sisters, she became a mum of two, has also previously appeared in the Daily Mirror newspaper and Amanda was absolutely delighted with her story in the magazine this week.
Interestingly Amanda’s story also appeared in a newspaper and a magazine when her sister Sam offered to be a surrogate and had baby Esme for her. Then Amanda had spent £30,000 and on IVF that hadn’t worked.
But when against all the odds Amanda recently gave birth herself to baby Thea she wanted to tell her story again. And as this was a new update, I was able to place it. And Esme really is a little miracle. When the clinic wrote to Amanda asking what to do with embryos left over from before, she and husband Darren decided to have one last go at IVF. That was paid for by sister Ellen – and incredibly it worked.
Amanda now has lots of beautiful newspaper and magazine cuttings to show both her daughters when they are older.

Amanda says: “We are all thrilled with the story in Woman’s Own. Thank you very much!”

I have my sisters to thank for my two children…

Amanda was thrilled with this story in the Daily Mirror

After spending £30,000 on 15 failed IVF attempts, Amanda Gudz had given up thoughts of having a baby. But she hadn’t counted on the selfless generosity of her sisters. For Samantha offered to be a surrogate. Using an egg from Amanda and sperm from Amanda’s husband Darren, the couple were thrilled when having implanted the embryo into Samantha’s uterus, she got pregnant. And this gave Amanda daughter Esme, now two.
Esme totally fulfilled Amanda but she and Darren had remaining embryos still frozen in storage. And then the hospital wrote to them asking what to do with the embryos. The choices are to continue storing them at a cost, donate them to another couple, allow them to perish or give them to research. There was of course one other option – Amanda and Darren could give the embryos the chance of life themselves.
So that is what they did. This time sister Ellen wrote out a cheque to fund the IVF. Only two embryos survived the thawing process and were good enough to implant into Amanda’s uterus. She really thought after so many years it would never work. But it did – against all the odds Amanda got pregnant and she has now had baby Thea. Incredibly, although born two years apart, the girls are twins.
When she was having Thea, sister Michelle stepped in to look after Esme.

Amanda told me: “I feel so lucky. But I wouldn’t have had my children if it weren’t for my sisters and I will be eternally grateful to them. The article was spot on. It reads great and I am so very pleased. Thank you so much.”

Interestingly the story about Amanda’s sister being a surrogate had already appeared in the press two years ago. But I was able to place this update again – and Amanda now has another deal with a leading women’s weekly magazine.

Do you have an update to a story that appeared in a magazine or newspaper years ago? Do contact me to see if your story can be sold again: Selling my Story

Selfless generosity of my younger sister gave me a baby – real-life story in the DAILY MAIL newspaper yesterday.

Sell your story to a newspaper.

Proving that stories in national newspapers do not have to be nasty or sensationalist to be printed, this delightful story appeared in the news section of the Daily Mail yesterday.
When Cheryl was 17 she discovered she’d been born without a womb. The news was absolutely devastating and she believed she might not ever meet a man who wanted her, let alone have a baby.
Fortunately when she met Jason, he loved her anyway. But although the couple tried very hard to make a life without children, she couldn’t put her dreams of being a mum on hold for ever and began looking into surrogacy.
It was then that younger sister Lyndsay Wootton offered to carry Cheryl’s baby for her.
As Cheryl still has ovaries, she and Jason underwent IVF and her eggs were fertilised with Jason’s sperm – but the resulting embryo was put back into Lyndsay’s uterus.
Lyndsay then gave birth to Cheryl and Jason’s son Elliot. Lyndsay tells me it was the ‘easiest decision I have ever made’ and needless to say her generosity has given her sister and brother-in-law a wonderful gift. In fact, Cheryl says she can never thank Lyndsay enough.
Regular sellyourstoryuk blog readers might recall a version of this story has already appeared via Featureworld in the Sunday People newspaper but as is common when interviewees come to me to sell a story, I always endeavour to gain them multiple deals. So you might not be surprised to know that this wonderful story will be appearing in Take a Break magazine on Thursday and a baby magazine has also offered to print Cheryl’s story.

Do you have a heart-warming, emotional story about something special that has happened to you and your family? If you feel your story would make a lovely read and are looking to maximise coverage, do email me some details here: Sell My Story.

‘My sister had my baby…’ one woman’s emotional story

Cheryl Keye’s emotional true-life story about how her sister became a surrogate for her appeared in the SUNDAY PEOPLE newspaper at the weekend.

When Cheryl emailed me last week through Featureworld’s Sell My Story contact form, I knew it would make a wonderful read for a Sunday newspaper. And I wasn’t wrong as Cheryl’s story was snapped up by the Sunday People newspaper and on Easter Sunday, appeared over two pages.
Cheryl’s emotional story began when she found out at the age of 17 she suffered from a rare condition and had been born without a uterus. It was a devastating shock, not least because it made her feel less of a woman and she worried how she would explain it to any man.
However, in her early twenties she met her husband, Jason, and he reassured her it didn’t matter to him. However, they did both want children. They toyed with the idea of adoption but as Cheryl grew older, she began to wonder if it might be possible to have their own child – after all, although she doesn’t have a womb, she does have her ovaries.
The couple began considering surrogacy. But it was when Cheryl told younger sister Lyndsay their plans, she made them the most wonderful offer. She offered to carry their baby for them in her womb.
Eggs were retrieved from Cheryl and fertilised with Jason’s sperm and one was put back into Lyndsay’s womb. The fantastic result was last year Lyndsay gave birth to Elliot, Cheryl and Jason’s gorgeous son. He is now eight months old and has changed their lives beyond all belief. Needless to say, Cheryl and Jason are incredibly grateful for Lyndsay’s selfless gift to them.

This story is now due to appear in a national women’s weekly magazine, in another national newspaper and also in a monthly women’s magazine.

Cheryl said: “I really wanted to sell my story to give hope to others. However, when I first looked into selling my story, I had no idea how to go about it. But going through Alison has enabled us to place the story with a variety of publications so we really feel it is getting excellent coverage.”

Have you used a surrogate to have a baby? Maybe you are considering surrogacy via a relative or friend or through an agency. Surrogacy stories are always popular so do contact me to discuss which magazines and newspapers might be interested. For a personal appraisal of your real-life story, email alison@featureworld.co.uk