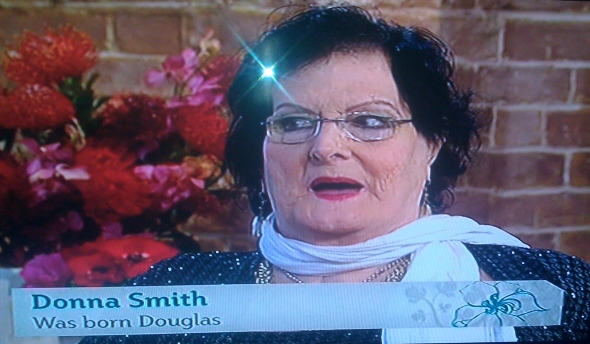 Donna’s story about how she had a sex change at the age of 69 – she is now aged 74 – has been placed via Featureworld with the Sunday Mirror and MailOnline.

But Donna’s biggest dream was to appear on ITV’s This Morning and to sit on the sofa with presenters Holly Willoughby and Philip Schofield. And we are delighted that we’ve been able to make that wish come true for Donna.

Donna said: “A friend contacted Alison to ask her about doing a story. I was a little wary – I’ve encountered so much prejudice in my life and so much unhappiness and I did wonder if doing a story in the press was the right thing.
“But after talking it over with Alison I decided to go ahead. One reason was because I believe it is only by getting stories like mine out into the public eye that such prejudice will eventually no longer exist at all. All my copy was read back to me so I had absolutely no surprises when I opened the paper and saw my story. Alison wrote my story exactly as it was and it was moving to see it there in black and white.
“I can honestly say since my article appeared in the Sunday Mirror and Daily Mail my life has changed beyond all belief. Many people where I lived have no idea I’ve had a sex change but everyone has been so supportive and it is lovely that now everyone knows. I’ve even been stopped in the street by well-wishers saying well done.
“When Alison told me ITV This Morning wanted me on their show I was overjoyed – it was a dream come true. I can’t describe how happy doing this has made me and how enjoyable the whole process has been.”

If you would like advice about placing your story contact Featureworld here: Selling a story to the press. 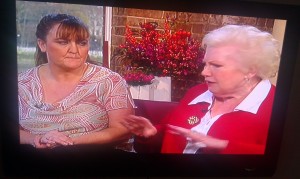 Marie initially came to us after feeling she had been bullied into aborting her Down’s Syndrome baby. She was desperate to get her story out in the open to enlighten others who may have found themselves in the same situation.

We placed marie’s story in THE DAILY MAIL and today she has appeared on ITV’s THIS MORNING.

Marie says, “Alison gained me the sort of publicity I never imagined would be possible. I can’t thank her enough for getting my story out there.”

Have you been pressured into having an abortion? If you have, get in touch via our contact form.

IN THE NEWS: Testicular cancer – as seen on ITV’s This Morning…

Critics might complain that ITV’s This Morning went too far with its real naked man on the show today. But it was all in a good cause – to raise awareness of testicular cancer and to encourage men – and their partners – to be more aware… 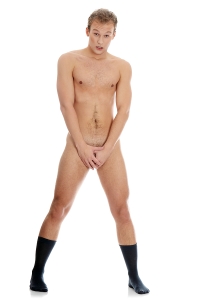 New research released today by Orchid, the male cancer charity, has found that 50% of men would feel more comfortable if their partner checked their testicles for the signs and symptoms of testicular cancer than their GP.

Testicular cancer is the most common cancer among young men aged 15-45 and affects around 2,000 men every year. However if caught early enough this common form of male cancer has a cure rate of over 95% yet in over 1/3 cases the disease will have spread before diagnosis.

PARTNERS SHOULD CHECK THEIR MAN FOR TESTICULAR CANCER…

With this in mind, Orchid are keen to encourage women to get more involved in their loved ones health, especially as almost three quarters (62%) of the men questioned revealed that although they would prefer their partner to carry out these vital checks, they never do.

The new survey also found that ‘embarrassment’ is a key barrier that stops men from making potentially lifesaving appointments with their GP for a testicle check-up.

Testicular cancer sufferer William Gingell was diagnosed at 17, he says:

‘I really owe my life to my girlfriend, it was her who found the lump in my testicle and without her encouragement and support I know I would have been far too embarrassed to make an appointment with my GP to get it checked out. I think this campaign is a great idea and wholeheartedly encourage women to check their partners or at least encourage their partners to check themselves; they may just save a life.’

HIS HEALTH IN YOUR HANDS

In light of this new research, Orchid will be continuing ‘His Health In Your Hands’ campaign throughout 2012, which calls on women to be proactive in encouraging their man to be aware of the signs and symptoms of the three male specific cancers – testicular, penile and prostate – so they can seek advice as early as possible.

If you would like more information about Orchid, symptom advice and details on how you can help fight male cancer visit their website http://www.orchid-cancer.org.uk.

Orchid is the UK’s only registered charity focused exclusively on male-specific cancers. Formed in 1996 by a testicular cancer patient, Orchid exists to save men’s lives from testicular, prostate, and penile cancers through pioneering research, the provision of specialist information and support, campaigns and raising awareness.

Did you save your partner’s life? Leave your experience below or contact me here: Sell story

Meanwhile did This Morning go too far? Leave your comment below… 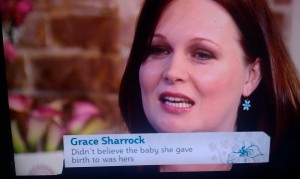 Grace was a natural on ITV's This Morning

On Monday afternoon Grace Sharrock was out and about near her home in Cheshire with her daughter, 11 and 18 month old twins. Then she picked up a message on her mobile from me …
I had been rung by producers at ITV’s This Morning asking if I had any interviewees who’d suffered from postnatal depression who could appear on the show. The only snag was – they were needed for the next morning’s show!
That was when I thought of Grace – a year ago Grace’s story about how when she was pregnant with her eldest child, she’d suffered severely from postnatal depression – had appeared via Featureworld in a double page in the Daily Mirror. And when she’d got pregnant with the twins she was terrified the same thing would happen again. Fortunately in her second twin pregnancy she’d been prescribed the drug Lithium and was fine when she gave birth to the twins.
Grace rang me back and decided then and there she would love to go on This Morning! Having got her mum to care for the children, Grace was picked up by taxi laid on by This Morning. She was then put up in a hotel overnight and after breakfast the show sent a car to pick her up and take her to the studio.
Fortunately the wonderful producers at This Morning take care of all travel arrangements and Grace had a fantastic time. She also looked stunning talking on the sofa with Holly Willoughby and Philip Scofield. A doctor was also brought in to give some top advice about postnatal depression.

Said Grace afterwards: “It was a great experience even though I was terribly nervous before I went on.”

Grace is one of a number of Featureworld interviewees who are invited onto This Morning – along with other TV chat and news show and documentaries.
Meanwhile, she has also written a book on postnatal depression: Saving Grace and you can read more on her story here: Daily Mirror.

If you would like the chance to tell your story on TV, contact me here: Sell My Story

Featureworld interviewees have been in demand recently… and the past week has seen a variety appear in magazines and on TV…
First up were Mark and Kerry McDougall. Their story about how they got their son back after he was taken into care appeared in NEW magazine. 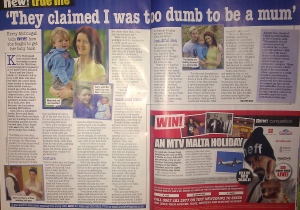 I have followed this story for two years. Read more here: Please don’t take my baby

Next was Cheryl Keye’s story – Cheryl’s real-life story about how when she discovered she couldn’t have a baby herself, her sister Lyndsay had one for her. Having appeared in the Sunday People newspaper and then the Daily Mail, a beautiful spread then appeared in Take a Break magazine… 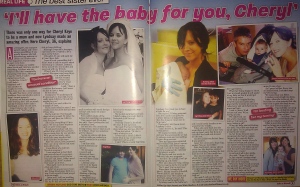 Cheryl said: “I just want to say how impressed I am at the way you have handled my story.”

Vanessa Finn recently appeared on ITV’s This Morning joining in a debate about revenge and if taking revenge on an unfaithful husband is ever a good thing. Vanessa spoke brilliantly and her story was a valuable contribution to the discussion! 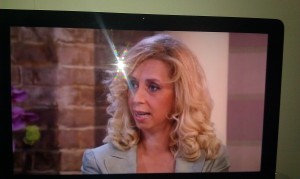 Vanessa talks about revenge on This Morning - click to view

Vanessa said: “I had a fantastic time on the show and can’t thank Alison enough for putting me forward!”

And my family of six generations appeared on ITV’s Daybreak, who sent a camera crew to their home in Wales. Their story appeared last week in The Sun. Here is great-great-great nan Gladys with the Daybreak reporter holding the most recent addition, baby Harry. 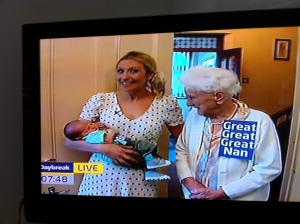 I just want to say how proud I am of everyone – I have had wonderful feedback from so many editors saying what delightful interviewees are always sent to them via Featureworld!

Malissa Jones – who once weighed 34 stones and is now anorexic – appeared today on ITV’S THIS MORNING. 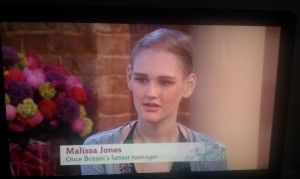 Malissa Jones on ITV's This Morning

Since Malissa Jones incredible real-life story broke in Closer magazine last week and then went to MailOnline, I have been inundated with requests for her to be interviewed.
Every TV channel in the UK has requested over the past week to speak with Malissa but today she did an exclusive interview with ITV’s This Morning where she discussed her plight with presenters Philip Schofield and Ruth Langsford.
On board was a psychologist who explained that although Malissa – once dubbed Britain’s fattest teen – used to overeat, her anorexia is now still triggered by the same emotional issues, which she needs professional help with to address to get better.
As well as This Morning, Malissa’s story has been placed worldwide in the US and in Germany – and we are now in talks with documentary makers to do a film on Malissa as she battles with this disease.
Her story has also been sold to another weekly women’s magazine as well as a further deal with a UK national newspaper.
And between them, this blog, sellyourstoryuk and my main website, Featureworld has seen over 8000 hits alone just on her story.
Thankfully – because there has been such huge interest – Malissa was already signed with Featureworld to handle all her publicity. I have done all her stories since she had her bypass in 2008 and continue to not only give Malissa and boyfriend Chris advice, but also offer them emotional support during what has been a difficult time.

I will keep everyone posted on Malissa’s progress, so do check back regularly for updates. And if you missed today’s exclusive ITV interview, do click on the photo of Malissa on TV above to see a clip.

Do you have an incredible story to sell but don’t know where to turn to for help? Do contact me here, Sell My Story and I will do my best to help you.